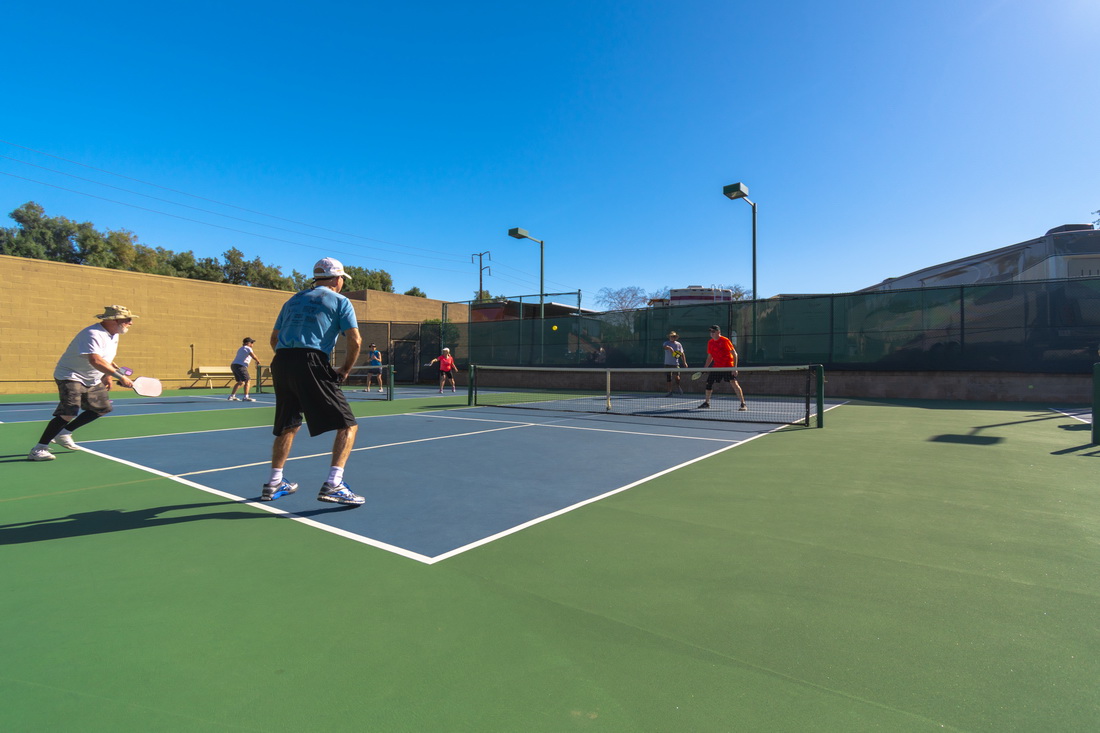 Emerald Desert RV Resort is thrilled to announce that work has begun on THREE BRAND NEW pickleball courts with more to come this season. The three pickleball courts, replacing one existing tennis court, are scheduled for completion fall 2013.

To meet customer demand, the resort will be converting an existing tennis court into the smaller pickleball courts. For those not familiar with the paddle sport, pickleball is a combination of tennis, badminton and table tennis. However, pickleball courts are 1/3 the size of tennis courts and ball speeds average about 1/3 the speed experience during a tennis match. Finally, the net, similar in style to tennis, is mounted two inches lower than the 3 ft, 6 inch mounting of a tennis net.

The relatively new sport is continuing to gain traction around the US and Canada. The USPA, yes the United States Pickleball Association, estimates there are around 100,000 active pickleball players in the country.

According to Wikipedia, “the game started during the summer of 1965 on Bainbridge Island, Washington at the home of then State Representative Joel Pritchard…He and two of his friends, Bill Bell and Barney McCallum, returned from golf and found their families bored one Saturday afternoon. They attempted to set up badminton but no one could find the shuttlecock. They improvised with a whiffle ball, lowered the badminton net, and fabricated paddles of plywood from a nearby shed.”

Join the “craze” and head on over to Emerald Desert RV Resort to enjoy our brand new pickleball courts. The courts are scheduled to be completed fall 2013.


Visit Emerald Desert
The more you stay the more points you earn towards a free night!
Join Today
Copyright © 2022 Sunland RV Resorts. All copyright and other intellectual property rights in all logos, designs, text, images and other materials on this website are owned by Sunland RV Resorts and/or its group companies or appear with permission of the relevant owner. ‘Sunland’ is a trade mark of Sunland RV Resorts.